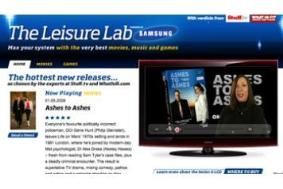 Either way, if you want to find out about the best movies and games to max your home entertainment system, head on over to The Leisure Lab, the new entertainment micro site we've developed in conjunction with Samsung UK.

Each week we'll be adding new film and games reviews, brought to you buy the experts at whathifi.com. You can see and hear our very own Clare Newsome, Dom Dawes and Tom Parsons in action, and find out what they think of the discs they've just reviewed.

This week we cast our eyes (and ears) over Ashes to Ashes and No Country For Old Men on DVD, The Assassination of Jesse James and Alien vs Predator - Requiem on Blu-ray and Grand Theft Auto IV on Xbox 360.

Soon we'll be adding a music channel too, and we're lining up some fantastic competitions with Samsung to give away their latest products. The Leisure Lab is launched to coincide with the introduction of Samsung's new Series 6 LCD TV.