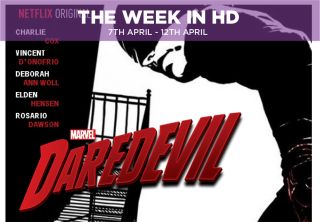 Don't forget to check out our dedicated Playlist Twitter account @WHFPlaylist for more news and reviews of our favourite content, as well as the occasional competition.

Well, you're in luck as Predestination is very much all of the above. It features the Oscar-nominated Ethan Hawke as a time-travelling enforcement agent who jumps from 1992 to the 1970s to stop the one criminal who has eluded him.

The premise is less Jean Claude Van-Damme's TimeCop and more Rhian Johnson's Looper. Try to keep up with the plot if you can.

Buy Predestination on Blu-ray at Amazon

It's been a while, but Wong Kar Wai's biopic of martial artist Ip Man (who once tutored Bruce Lee) is out on Blu-ray.

In true Kar Wai style it looks fantastic and Tony Leung as Ip Man and Ziyi Zhang as Gong Er anchor the film, but this version has been heavily cut. Still, if you're looking for incredibly well-staged action sequences The Grandmaster offers that in spades.

Buy The Grandmaster on Blu-ray at Amazon

A mix of Game of Thrones and Pirates of the Caribbean, Black Sails picks up where the first series leaves off with the crew of The Walrus stranded on an island with a Spanish armada standing between them and 'their' gold.

There are more enemies, backstabbing and scheming ahoy in a second series that arguably bests the first.

The Fast and the Furious Sky Movies HD Crime and Thriller, 7pm

The Fast and the Furious franchise is now seven films strong (!) but we'd rank the first among the best the franchise has to offer.

A sort of Point Break with cars, it sees LAPD cop Brian O'Conner (the late Paul Walker) sent into the street racing world to uncover who's been carrying out a series of high-speed robberies in the Los Angeles area.

This film is almost unrecognisable from the franchise it's become, but despite the small scale it has plenty of action to satisfy any petrolhead.

Liverpool's hopes of playing in the Champions League have been dealt a near fatal blow after consecutive losses against Manchester United and Arsenal.

On paper they should be able to overcome Blackburn, but with the way Liverpool have been defending there's a decent chance of an upset here.

The heats are over, and now the 11 contestants will get their first taste of working in a professional kitchen. The first five have to deal with the pressures of lunchtime service at the Typing Room, an East London establishment with a busy clientele and demanding work environment.

After that, it's back to the MC kitchen where they'll show off what they've learned from their time in the restaurant and invent a dish from scratch that will wow the judges, including the formidable Monica Galetti...

Public Enemy. Ray is injured during an attack on the Mayor's office, which leaves Oliver and the gang needing to find the culprit before the police do.

Knockout week continues with four amateur chefs plunged into the busy lunch service at Theo Randall at the InterContinental, where they will cook and serve every dish on the menu to customers. Daunting, stressful and exciting - who will buckle under pressure and who will be in their element?

Back at MC HQ, they have to create a dish based on their experiences, and cook it to perfection for the judges...

Fortitude concludes this week with a dramatic episode as Vincent (Luke Treadaway) finds himself in a potentially life-threatening situation, while Dan (Richard Dormer) must make a tough decision.

Severance. Mad Men is back and we're firmly in the Seventies. Expect some awful comb-overs and some dodgy 'taches as we race towards the series finale.

Marvel's TV takeover continues with Daredevil, the first series of their partnership with Netflix. Charlie Cox (Stardust) puts on the red-tinted glasses of lawyer Matt Murdock (the costume comes later) as he makes a name for himself in New York City.

Vincent D'Onofrio plays The Kingpin, with Deborah Ann Woll as Karen Page and Rosario Dawson as Claire Temple. Early impressions from those in the know peg it as darker and less family-friendly than Marvel's other work.

One of Us. Cal (Kyle MacLachlan) wants revenge on Coulson, so how does he go about it? By assembling his own team of villains to try and destroy S.H.I.E.L.D. of course!

New arrival Dr. Andrew Garner (played by Blair Underwood) helps Skye with her newfound powers and turns out to be a blast from the past for May.

The nine contestants left at the end of Knockout Week must now cook for a place in the semi-finals. They have to cook just one dish, but it has to be one heck of a dish to stay in the competition.

A single mistake will have one unlucky chef saying goodbye.

The most famous horse race is back which means plenty of posh frocks and lots of punters heading to the bookies to place their bets.

Remember the days when Roland Emmerich dominated the box office by blowing up famous landmarks?

Independence Day is a bit of throwback to World War II films, except it's laden with an awful lot of silliness and, of course, an Apple Macbook defeating a technologically advanced alien race.

If only they'd installed Norton Anti-Virus.

Part-funded by fans, Veronica Mars brings the feisty private detective played by Kristen Bell back to Neptune. This time she's investigating a case that dates back to her time in high school.

Bell fits into the character of Mars like she's never been away, while the return of several popular characters makes this film a pleasurably trip down memory lane.

The Studio Ghibli season continues with Castle in the Sky, a breathtakingly beautiful animated film from Hayao Miyazaki. It follows a young boy called Pazu who rescues a girl being chased by sky pirates and government agents.

Her rescue sets in motion a race to find the legendary floating castle before others find it. It's a great adventure and it features a terrific music score from composer Joe Hisaishi.

It's the Manchester derby and momentum is with the red half of Manchester after a spell of good results.

City's title hopes are effectively in tatters with some poor recent form, but this is a derby, so any previous form goes out of the window.

All eyes will be Rory Mcllroy as the Irish golf star bids to add the Masters to his collection of trophies. If he makes it to Sunday then he's definitely in with a shout of getting that green jacket.