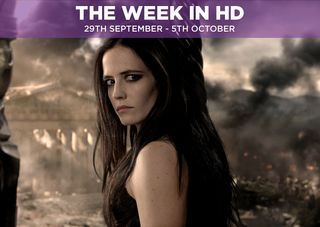 Zack Synder's 300 was a huge hit back in 2007 but - like Sin City - it's been a long wait for Rise of an Empire; a film that's a prequel, a side-quel (it happens at the same time as the first film) and a sequel. Phew.

But is it any good? Well, yes and no. It still has the goods in the looks department and features a tub-thumping soundtrack. But, for all the abs on display, it can be a little bland.

The real reason to watch it is for Eva Green, who towers over everyone else with a crazy, wild energy. When she's off the screen, the film becomes a little less interesting.

To read more on our thoughts, have a gander at our review of the 300: Rise of an Empire Blu-ray here.

Nothing gets easier for Andrew Lincoln and his family in this fourth season of The Walking Dead. Having survived the war with the Governor, the survivors try to create a safe haven within the prison - only to find that are bigger threats to their safety than the 'walkers'. It's another harrowing but compelling season.

Veteran British director Ken Loach delves back into the troubles that affected Ireland throughout the 1920s and 30s in Jimmy's Hall.

If you're a fan of The Wind that Shakes the Barley, then Hall serves as a spiritual sequel, picking up after the Irish Civil War ends with political activist Jimmy Gralton (Barry Ward) leading the charge for Ireland's free thinkers. Definitely worth a watch.

Ghost in the Shell Blu-ray

Anime classic Ghost in the Shell finally appears in the UK in this remastered Blu-ray edition. The story concerns a female cyborg police officer who's charged with finding the elusive hacker the Puppet Master, but along the way, the film finds time to ask some of the bigger questions of human existence, such as, what makes us human and what is our purpose?

The influence for several cyberpunk films since the turn of the century, it's interesting how ahead of its time Shell was and how technology has (and is) catching up with the film. This release comes in a Steelbook case and glossy booklet.

Adam Sandler's latest is much like Adam Sandler's previous; easy, on the nose jokes that won't tax your brain but will probably give your funny bone a prod (just about).

In it, Sandler - reunited with Drew Barrymore - double books the same holiday to Africa as Barrymore's harried mother, bringing their kids along for the ride in this comedy that has a few decent jokes and more than a few weird ones. One for Sandler fans.

Two boats and a helicopter. Things are getting tense in The Leftovers as Christopher Eccleston's priest, Reverend Matt Jamison, attempts to keep his church from foreclosure, despite diminishing attendances and death threats against him.

Lars von Trier, former persona non grata at Cannes, is back with his latest film Nymphomaniac (split into two parts). Exploring the sexual life of Charlotte Gainsbourg's Joe, it's not an easy watch as she recounts the various encounters she's had to a man (Stellan Skarsgaard) who rescued her off the streets.

One thing is for sure, you'll never look at Jamie Bell in the same way again.

Manchester City were so close to getting a point in their first match away to Bayern Munich, only to be denied by a late winner. It doesn't get any easier for the Citizens either, with joint-Serie A leaders Roma heading to the Etihad stadium in what is already a must-win clash.

Patisserie. As we enter semi-final week, the final four start off with a signature baklava.

Then, they're met with a deviously tricky technical challenge: the German schichttorte - a cake made of 20 layers of different-coloured sponge. Blimey.

And for the showstopper, they must create two elegant and intricate entremets - a modern French dessert of the highest standard.

Gone Smooth. Eph and Nora try to save the life of Captain Redfearn as the virus ravages his body, while Abraham Sektarian (played by David Bradley, who you may remember from Game of Thrones and the Harry Potter series) is released from jail and puts in motion his own plan to halt the virus.

Arsenal were completely outplayed by German side Borussia Dortmund in their Champions League opener, but will be glad of the chance to redeem themselves on home turf with the visit of Turkish side Galatasaray.

Domestic form for the Gunners has been patchy and, with their injury list growing ever longer, they'll be hoping to come out of this one unscathed.

Post-war Birmingham's premiere crime family is back, and this time they've set their sights on London. The Peaky Blinders are bringing their violent-yet-stylish world into the roaring twenties, with smoky bars, razor-edged caps and more charisma than should be decent for gangsters.

If the likes of Cillian Murphy and Helen McCrory weren't enough, the period drama has Tom Hardy joining its ranks as leader of Italian rival gang the Sabinis.

The 100 Series One, Netflix

It wouldn't surprise us if you had never heard of this teen TV show, but the premise is an intriguing one. Set 97 years after a nuclear war has ravaged the earth, 100 teenagers are sent back in the hopes of repopulating it.

Mix the Hunger Games with Bear Grylls you may have an idea of what this TV show is. It won't knock your socks off but it is (we hope) building the foundations for a second season that takes its novel idea further.

QI is back, and it's the L series! We're looking at animals beginning with the letter L in tonight's first episode, from lonely whales to larval locomotives.

Stephen Fry is oversees the proceedings, with Alan Davies, Sarah Millican, Ross Noble and Colin Lane as the panellists.

Kill the Moon. The Doctor and Clara hop into an old space shuttle and fly off on a suicide mission to the Moon, which is about to fall to bits. On the lunar surface, they find corpses, spidery creatures and a dilemma that once again has us wondering if the Doctor is a true hero after all.

We do hope they save the Moon, because we rather like the little rock.

Celebrating its 20th birthday (alongside other '94 greats such as Speed, Pulp Fiction, The Lion King, The Shawshank Redemption and... too many others to list); Gump ranks as one of Tom Hanks's most iconic performances as Gump, a character who isn't the smartest, but who perseveres against adversity and lives out quite a remarkable life.

Hilarious, touching and uplifting. There haven't been too many films since Gump that have matched its fearless earnestness. And who doesn't love saying"'Run, Forrest, run"?

It's been 13 years since the release of Donnie Darko and we're still not sure what it's about. Giving us our first real look at Jake Gyllenhaal, it's about his teenager being plagued by visions of a large rabbit that coerces him into committing crimes.

Playing like a twisted version of 1950s film Harvey, Darko is a strange - and at times abstract - film. If you can work out its meaning without any help, then we tip our hats off to you.

2014 F1 Championship: The Japanese Grand Prix BBC One HD, 6am

Lewis Hamilton stormed to the top of the Formula One championship pile with an imperious performance in Singapore. However, he did it without having to face Nico Rosberg after the German was forced to retire from the race.

Battle lines will be redrawn in Suzuka and, with the number of races left now as many as you can count on one hand, every point counts.

Manchester United survived a late onslaught from West Ham and a numerical deficit following Wayne Rooney's brain fart to record a win last time out in the Premier League. Reasons for optimism after a shaky start to the season?

United will need to show the same resilience aganist an Everton side that proved against arch-rivals Liverpool they won't give in without a fight - especially when your centre back can ping them in like that from 25 yards.