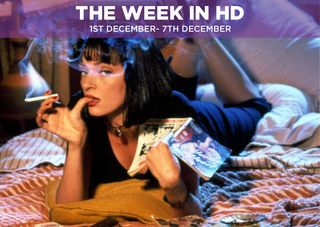 It's a week of anniversaries (see below) as the glorious Blade Runner hits 30. Ridley Scott's meticulous sci-fi film sees Harrison Ford's detective go on the hunt for illegal androids and, even to this day, Blade Runner stands out as one of the most imaginative and challenging sci-fi films out there. And it looks jaw-droppingly good in HD.

Quentin Tarantino's second film (and still quite possibly his best) reaches the grand old age of 20, and it doesn't look any the worse for wear.

A film with intersecting storylines concerning a boxer, two hitmen, a mob boss and his wife, it's filled with iconic images, great lines ("And you will know I am the Lord when I lay my vengeance upon you!") and some utterly hilarious moments. Plus, it has Christopher Walken. You can't get much better than that.

Spawn of the original TV series and sequel to one of the biggest UK comedies ever, Inbetweeners 2 may offer more of the same but it's a fun, if overly familiar, trip into the lives of these teenagers looking for a good time in Australia. Funniest moment? When they're stranded in the desert. The things people do when they're desperate…

Buy The Inbetweeners 2 at Amazon

A film in which Hercules (Dwayne 'The Rock' Johnson) wears a hat made out of a lion's head. Need we say more? Alright then.

Hercules is more legend than the real thing in this revisionist take on the hero who may not be as God-like as we thought. He's up against it when he's sought out to help deal with a tyrannical warlord. Johnson brings the charisma, but the rest of the film? Not as much. Diverting, but not quite legendary.

But Hercules at Amazon

The Mask. The first rule of fight club is that you don't talk about fight club. That's going to become problematic for Detectives Gordon and Bullock when they pitch up and start investigating a Gothamite who could be using it as the world's worst job interview process for his financial firm. We'd prefer to crunch numbers, not bones.

Coda. It's the mid-season finale of The Walking Dead, and it brings up yet more conflict as Rick and the group go up against Dawn and her officers to save Beth and Carol without causing any more deaths. It's probably more relaxing to be a zombie in this TV show than a human.

Flash is Born. This week Flash has to contend with yet another metahuman crawling out of the works.

This time it's a person who can transform into metal – you could even say that this person is a… man of steel.

Bella. Sherlock is called in when a groundbreaking super computer gets stolen, but he gets distracted by trying to prove the technology is wrong and not as clever as he is. Obviously.

Test of Strength. American Horror Story shows that it still has plenty of horrifying muscles to flex, as tonight's episode focuses on Dell the Strongman (played by Michael Chiklis), who goes on a violent spree to ensure no one finds out about his sexuality. A fine moment of drunken bonding with his estranged son Jimmy isn't enough to soften the blow as yet another character exits the stage.

The chefs need to be at the top of their game as they tackle unique and expensive dishes in head chef Helene Darroze's mostly silent but tense kitchen.

Heartless. The mysterious Henry Parrish (John Noble) doesn't appear to be happy this week, and to show his displeasure, he sends out a succubus that drains the lifeforce out of victims. Ichabod and Abbie are on the case.

Guilty. When Ted becomes the primary suspect in a murder investigation after a dead body is found in his gym, it causes conflict between Oliver and Laurel as to whether he's innocent or not. Elsewhere, Roy Harper shares a secret with Felicity that could be very damaging.

Still recovering from her close encounter with the 'Belfast Strangler', DI Gibson comes across a surprising revelation about just how disturbingly persuasive Paul Spector can be.

The Writing on the Wall. Coulson's obsession with drawing circles (and straight lines) finally gets an answer, as we learn what's been driving him up the wall when the team track down a man who's been carving the same symbols into his victims. Just what could those symbols mean and where will they lead Coulson and his team? (Spoiler: Inhumans – maybe.)

Ladies and Gents. Ross Noble, Sue Perkins, Kathy Lette and Alan Davies are the ladies and gents on the panel in tonight's quite interesting episode.

Chelsea return to the north-east and face a possible banana skin in the form of Alan Pardew's resurgent Newcastle. Odds are against the home team, but Sunderland managed to restrict Mourinho's men to a goalless draw. And Newcastle has been one of the surprise teams of the last month.

Could Chelsea drop some points as we head towards the busy Christmas schedule?

The Marriage of True Minds. The introduction of the mysterious Telemon (played by Clive Standen) seems to have livened up Atlantis. Queen Ariadne undertakes a journey to her new suitor's homeland of Aegina, but Jason fears for her safety.

Blessed be the Dammed. Constantine is teetering on the edge of being a decent show or a slightly mediocre one. We're hoping this episode strikes a point for the former. This time Zed experiences a vision of snakes that leads her and John to a small town where a preacher has the ability to heal his congregation. Is this all part of the dark uprising that John's been fated to stop?

It's December, Home Alone's on telly - it's now officially Christmas.

The perfect movie to have on in the background while we put up the Christmas tree.

Remember Me BBC One HD, 9pm

The BBC One mini-series starring Michael Palin concludes, as Hannah is motivated to help save Tom Parfitt (Palin) from his haunting. In doing so, it could have percussions for her and her family.

There's Something Else Going On. Carrie is forced to improvise after her mission is endangered, as the CIA close in on a leak.