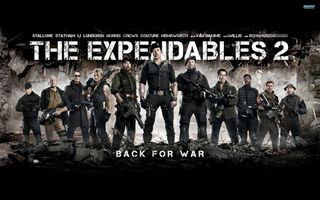 Welcome to The Week in HD, our guide to all the must-see TV shows, films, sports and Blu-ray releases to grace your screen over the next seven days.

This week sees the end of my obsession with MasterChef: The Professionals as it comes to an exciting and delicious end; there's the British Comedy Awards and the BBC Sports Personality of the Year Awards to look forward to; and I'm off to see The Hobbit: An Unexpected Journey in glorious 3D IMAX this weekend!

The action heroes are back, this time on a mission to avenge one of their own. After a supposedly simple mission set by John McClane (okay, Mr Church as played by Bruce Willis) goes awry and ends in death, the crew of mercenaries, along with some new members, are hell-bent on exacting revenge on those responsible. Expect plenty of explosions, old-school fights, some hefty plutonium – and a large dose of good old fun.

The complete remastering of one of the best Star Trek series into glorious high-definition Blu-ray with a 7.1 DTS HD MasterAudio soundtrack is under way, and Season 2 has been released just in time for you to have a truly Trekkie Christmas. Hop on board the USS Enterprise and boldly go forth with Captain Picard and his crew as they experience Klingon culture and meet the Borg, while Data defends his humanity, and Riker grows his iconic beard.

There's special features aplenty, with an extended cut of episodes, gag reels, behind the scenes making-of featurettes, and best of all – the cast reunited for a roundtable chat that includes Sir Patrick Stewart, Jonathan Frakes, LeVar Burton, Will Wheaton, Gates McFadden and Brent Spiner to celebrate the 25th anniversary of the series.

It's the final week, and the remaining chefs have to use all their talent to create two courses from a range of ingredients that don't include meat, poultry or fish.

The three finalists have to cook a grand three-course meal for a room full of stern Michelin-starred chefs from around the world. However, they first have to get their own dishes approved by Gregg and Michel, otherwise they'll have to cook from Michel's own menu...

Harry Potter and the Order of the Phoenix - Sky Movies HD - 9.35pm

Unpopular opinion, perhaps, but the fifth book in the Harry Potter series is my favourite. Yes, it's the longest, but I do love the whole Order of the Phoenix bit, where we get an insight to all the adults involved – both the ones fighting against Voldy, and the Death Eaters – rather than just the students at Hogwarts.

Also, I do love a flashback, and the little titbit of the Marauders and Snape during their time at Hogwarts (cruelly cut short in the film) is still my favourite. Oh and the battle with the Death Eaters at the Ministry of Magic, and yet another tragic death...

In the penultimate episode, the finalists get a first time ever all-access pass to the inner workings of the kitchens in Heston Blumenthal's three-MIchelin starred restaurant The Fat Duck. After getting a masterclass in the secrets behind the inventive dishes at the restaurant, the finalists are given the daunting task of serving Fat Duck-standard food to specially invited guests.

It's nearing the end of season 2, and Bel tries to pull the investigation into the organised criminal Clienti after a source is murdered, but upon discovering the depths of corruption, Freddie and Hector show no signs of stopping their pursuit of the story.

Jonathan Ross hosts the 21st British Comedy Awards, celebrating and rewarding the funniest people and shows of the year.

This is it – the final. It's gone by way too quickly, hasn't it? After weeks of competition, the finalists have one last chance to cook up a three course that will dazzle and delight the judges, to win the prestigious culinary title of the year.

It's the season finale, and Bel, Freddie, and Hector are about to break the story of their lives about the corruption across London's most influential men, but a tabloid scandal and high-level cover up threatens to halt their progress.

Jobs. Stephen Fry and Alan Davies are joined by David Mitchell, Sarah Millican, and Rev Richard Coles to talk about jobs of all sorts.

Rome: A History of the Eternal City - BBC HD - 8pm

Divine Gamble. Following on from last week's exploration of Rome as a thriving pagan city, tonight we look at how Rome became the centre of a new religion: Christianity. Casting aside paganism in favour of then much-persecuted Christianity was one risky gamble that Emperor Constantine took.

It has begun! The Christmas specials of looking back on everything to do with Christmas are a great way of spending the evening wrapped up in various blankets and not budging from the sofa until there's an apocalypse. We've probably all seen the best Christmas highlights from years gone by, but hey, it never gets old because it's Christmas!

The James Bond festivities show no sign of stopping, and will see it through the end of the year (next year celebrates Doctor Who's 50th anniversary), and it's a great night dedicated to the music of the Bond films. Conductor Carl Davies and the Philharmonica Orchestra play the iconic tunes from 23 films at the Royal Festival Hall in London, hosted by Bond girl Honor Blackman.

Sue Barker, Gary Lineker, and Clare Balding present the 2012 BBC Sports Personality of the Year Awards. What with the London 2012 Olympics and Paralympics and Tour de France and Wimbledon and everything else sporty, it's been a fantastic year for British sport, and what better way to sum up the year than by celebrating the talented athletes involved. There are 12 contenders in the list, including Andy Murray, Mo Farah, Bradley Wiggins and Jessica Ennis.