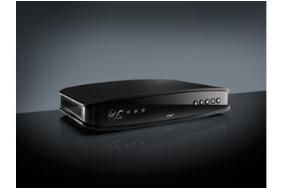 Unlike the existing V+ box, the 'V' has no hard drive for recording – it's simply a digital TV receiver.

The Cisco-made box is also 3D-ready and includes HDMI, Scart, USB and Ethernet ports. It has a power saving function which is said to cut electricity consumption by 95 per cent compared to normal standby mode.

Cindy Rose, Virgin Media's executive director of digital entertainment, says: "Our new V HD box is ideal for anyone who wants to experience the power of HD without the extra monthly fee."

Customers will need to subscribe to Virgin's M+ TV package or above to be eligible for the V HD box. For homes already connected to Virgin's cable network, self-installation (Quick Start) will be available from April 1st 2010. It will be free during the month of April, then £15 thereafter.

Yesterday Virgin announced it had added a sixth new HD channel to its TV line-up, Sci Fi HD. This follows the news that ITV1 HD, Europsport, Discovery, E4 and Film 4 will all join Virgin TV in high definition later this year.

Virgin is also developing a next-generation HD set-top PVR (personal video recorder) with TiVo which is due for launch sometime in 2010.