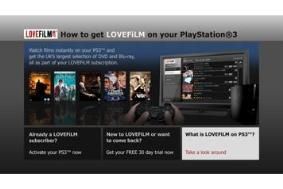 It appears that the LoveFilm video streaming service went live on the Sony PS3 last night.

Several users on our Forums spotted it on the video section of the XMB. All you have to do is click on the LoveFilm icon and it will download and install. You will of course need a LoveFilm subscription as well.

We'll be testing the service soon. In the meantime, you can find out what other PS3 owners think by looking at this thread on our Forums. Feel free to post your own thoughts too.

It's official: LoveFilm has confirmed it's struck a deal with Sony to bring the video streaming service to the PS3.

From next month, the LoveFilm service will become available on the XMB (Xross Media Bar) on all internet-connected PS3s, so users will be able to stream content directly to their TVs, as well as rent DVDs, Blu-rays and games by post.

Members will be able to scroll through titles on the page, search through categories including 'Pick of the Week', 'Most Watched' and 'Highest Rated', as well as searching for films by title, actor and genre.

The deal takes LoveFilm, which currently has 1.4 million subscribers, into the three million UK households with a PS3.

LoveFilm chief executive Simon Calver says: "This is game-changing for LoveFilm and transformational for the UK home entertainment market as well."

The LoveFilm movie rental streaming service looks set to come to the PlayStation 3 next month.

A video leaked on the LoveFilm YouTube channel announced the service would go live in November, though once the news was spotted the video was hastily removed.

LoveFilm is already available on some Sony Blu-ray players and TVs, as well as Samsung TVs, and offers a similar streaming film service to Netflix in the US.

You need to be a LoveFilm subscriber, which costs a monthly fee, but this grants you direct streaming access at the touch of a button.

We'll keep our eyes peeled for a confirmation announcement from Sony.