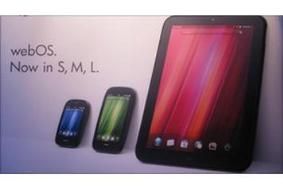 That exactly matches Apple's prices for the 16GB and 32GB wi-fi iPad2.

With 2011 set to be the year that tablets become mainstream, Hewlett-Packard is the latest to enter the fray with its iPad-challenging TouchPad.

Develped by Palm (although it won't use the Palm name), the TouchPad is based on the webOS operating system. It packs a dual-core 1.2GHz Snapdragon chip, Beats by Dr Dre stereo sound, 1GB of RAM, 16-32GB of storage and the usual cluster of sensors into a 13mm slab with a 1024x768 9.7in screen.

Neat touches include a resizable keyboard, wireless charging (via the Touchstone dock) and the by-now-requisite case/stand/keyboard add-ons to make sure your netbook never sees the light of day again.

HP has played to its strengths, too, and added wireless printing, backwards compatible with its recent printers. There's video calling via a 1.3MP webcam, full-fat web browsing with Flash and touch-to-share, a physical bump sync to get your HP Pre3 and/or Veer smartphone on the same page.

A wi-fi version will be heading Stateside in summer, with 3G (and 4G) versions to follow. No word on a European release yet, but it's unlikely to be before that.

As well as announcing the TouchPad, HP also revealed details of its two new smartphones. The Veer is about the size of a credit card with a 2.6in screen and 8GB of storage.

The Pre3 smartphone has a 3.6-inch diagonal screen, slide-out keyboard, video calling capability and 16 or 32 gigabytes of storage.