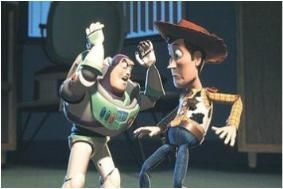 Finding Nemo is currently top of the Disney pile, raking in over $867m after its release in 2003, while DreamWorks Animation's Shrek 2 is the biggest grossing animated film of all time.

While Toy Story 3 has been out in many areas for the best part of a month, and generated over $630m, Disney held the film back in the biggest markets, such as the UK, due to the World Cup.

The Toy Story films are of course produced by Pixar, the animation company that Disney bought for $7.4bn in 2006.

Pixar films tend to perform better than those developed by Disney itself, and Pixar has two other sequels in the works, starting with Cars 2, which comes out next summer.

And it's not just paying punters that bring in the cash. Toy Story has seen a whole host of tie-ins from action figures to video games to theme park rides, each keeping the cash flowing in to Disney HQ.

The new film is also out in 3D (bringing in a couple of extra pounds in cinema revenues, too) – head to the Blogs section of the site to read Clare Newsome's review.