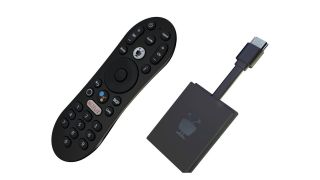 The company best known for its DVRs claims its dongle is "the market’s first unifying streamer". To that end, the device integrates all your favourite TV and movie streaming apps, including Netflix, Amazon Prime Video, Google Play, Disney+, HBO and YouTube.

Aside from built-in Chromecast and universal search functionality, there's support for Dolby Atmos audio and Dolby Vision HDR video. While the dongle comes with a traditional remote, users can take advantage of Google Assistant voice control with a press of a button.

TiVo has also teamed up with Sling TV to furnish fans of breaking news and live sports with regular TV viewing (users get a 7-day free trial of Sling TV). TiVo says it will also surface Sling TV content in its universal search results.

Finally, you get TiVo+, the firm's in-house video network that provides "thousands of hours of free movies and TV" as well as 49 free streaming channels ranging from news and food to kids and comedy.

While the DVR is far from dead, faster broadband speeds have enabled viewers to ditch clunky old DVR hardware for cloud-based streaming services such as Netflix. Could the Stream 4K stick will help TiVo gobble up a bigger slice of the streaming pie? We'll see.

If you're tempted, the TiVo Stream 4K can be ordered here for the introductory price of $50, a saving of $20 over the normal price. There are no subscription fees, it's purely an upfront cost. TiVo hasn't said if or when the device will be launched in Europe.