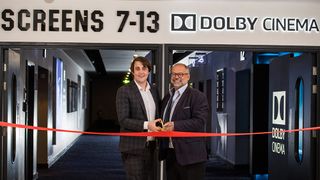 While Dolby Atmos is available in thousands of screens around the world, Dolby Cinema (which marries Atmos with Vision and bespoke auditoriums for the peak Dolby theatrical experience) is less ubiquitous, with 400 screens currently open or committed worldwide.

A Dolby Cinema in Odeon Luxe Birmingham Broadway Plaza is expected to open later this year, meaning over half of the seven UK Dolby Cinemas planned to launch "over the next several years" will be open.

Over 230 films have so far been released theatrically in Dolby Atmos and Vision, and the next batch includes Downton Abbey (September 13th), Ad Astra (September 20th), The Joker (October 4th), Frozen 2 (November 22nd), Star Wars: The Rise of Skywalker (December 19th) – which London-, Leeds- and Manchester-based film fans can look forward to.