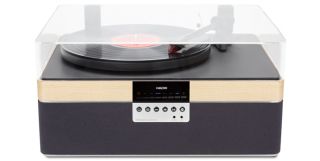 The+Record Player is an attempt to make a true plug-and-play turntable with extended functionality. To that end, +Audio has sited a turntable on top of a box incorporating amplification, speakers, and input and output socketry.

The box itself features real wood veneer (maple, pictured above, or walnut) and aluminium accents to suggest a little home décor pizzaz. On top sits a modified Pro-Ject Debut Carbon turntable, with an Ortofon 2M Red cartridge on a 22cm carbon-fibre tonearm.

Up front are controls for input selection, power on/off, Bluetooth 4.0 pairing, speed selection (33.3/45rpm), volume control, a 3.5mm analogue input and 3.5mm headphone output. There's also a control for something called 'wide mode', which is intend to create some meaningful width to a sound delivered by two channels sitting more-or-less on top of each other.

Around the back are a stereo RCA line-level input and output, a digital optical input, a control to defeat the integrated speakers (in case you're using The+Record Player purely as a turntable), a USB input/ouput and socket for mains power.

The package is rounded off with an IR remote control and year's warranty.

The perils of positioning a record player directly above some loudspeakers are well-documented. +Audio is at pains to point out the lengths it has gone to in order to negate these inherent problems, making much of the unique bracing and isolation/anti-vibration technology it's brought to bear.

The proof is all in the listening, of course - and with its Kickstarter goal well within reach and 34 days to go before fundraising closes, it seems likely The+Record Player will be on sale sooner rather than later. And then we'll find out exactly how it performs.