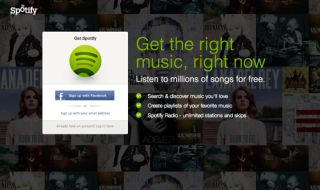 Spotify Web Player has launched in public beta mode allowing you to access Spotify's streaming music service through your web browser without downloading any software.

Launched in beta, there are unsurprisingly a few things missing from the Spotify Web Player experience for now, notably the highest sound quality offering and various other apps and features.

Firstly, there's no sign of the higher quality streamimg modes on the Spotify Web Player. The highest 'Extreme' sound quality mode gives you access to 320kbps streaming music on the desktop and app versions of Spotify.

There's no high quality sound option on the Spotify Web Player, so we presume it's on the lower 160kbps bitrate.

A Spotify spokesperson posted on the Spotify community forum: "We're currently not offering a high-bitrate option, and unfortunately I can't commit to when it will be coming although it is something that we're talking about for the future."

Spotify has made clear the Web Player is in beta mode, so it's no surprise that not all the features are available immediately.

Rival services such as Deezer and Rdio already offer fully-fledged web players, running alongside desktop and app versions, so a web-based Spotify has been on the cards for some time.

You can try the Spotify Web Player online now.