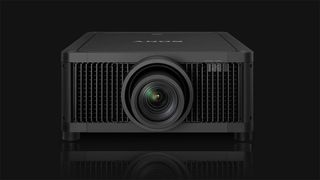 Based on Sony's pro projector design, but in a smaller footprint, the VPL-GTZ380 (pictured top) debuts the company's X1 Ultimate picture processor, an optimised-for-projector version of the X1 processor found in Sony Bravia TVs.

The processor powers an object-based HDR remastering tool that, as its name suggests, aims to enhance details and colours specifically based on the type of object in the frame – flowers, faces, hands etc. Two databases work together in real-time to clean up noise and upscale, too. Sony's Super Resolution reality creation processing has also been souped-up to improve detail enhancement and the upscaling of lower-than-4K material to a 4096 x 2160 resolution.

Like every projector in Sony's line-up, the VPL-GTZ380 utilises the three-panel (red, blue and green) SXRD system. The panels are paired with an enhanced laser light engine design, comprising a new 'deep red' laser, which Sony says requires less colour filtering and therefore minimises losses in brightness. As a result, Sony promises 100 per cent coverage of the DCI-P3 colour gamut.

They replace the VPL-VW570 and VPL-VW760, coming into Sony's home cinema range above the VPL-HW65ES and 2019 What Hi-Fi? Award-winning VPL-VW270ES, and below the VPL-VW870ES and VPL-VW5000ES – all four of which are existing models that remain in Sony's line-up for the foreseeable.

Both debut the X1 for Projector processor – a less advanced version of the X1 Ultimate for Projector chipset found in the VPL-GTZ380 – which power a new Dynamic HDR Enhancer for improved delivery of HDR10 and HLG material, as well as the Super Resolution processing mode.

All three new models sport HDMI 2.0b connections for 4K playback at up to 60 frames per second, albeit not the 120fps that some PS5 games will be available in.

How to set up your home cinema speaker system