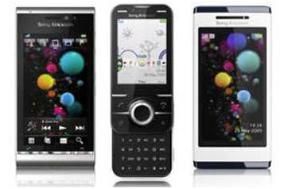 And once you've got your mobile sorted, you may want to get involved with the company's new PlayNow arena with movies download service for watching films on your phone.

The Sony Ericsson Satio gets the 'ultimate media experience' billing, offering a 3.5in screen, 16:9 widescreen resolution and a 12.1 megapixel camera.

Next in line is the Sony Ericsson Aino, which brings PlayStation3 control to your mobile, allowing you to access media content on your PS3, on your Aino, wherever you are, and watch on the 3in screen.

This is done via a local network or over the Internet anywhere in the world. MediaGo also allows you to transfer media wirelessly from your PC to your phone.

The Sony Ericsson Yari turns its attention to gaming. Gesture gaming, in fact. This means 'you move your body to play instead of pressing buttons'. Big in Japan, this is the first time we've seen it in the UK.

Last but far from least is the PlayNow arena with movies download service. This will be bundled with selected handsets and allows users to watch up to 60 feature films a year on their phone.

The movies are formatted for the phones, and once downloaded and transferred to your phone via USB, you can watch them as many times as you like for 90 days.

Sony Ericsson plans to have around 15 films available for download at any one time, with around four fresh movies added every month.

PlayNow arena with movies will make its debut with the W995 Walkman set for release this June, and will be available on the Satio and Aino mobiles.

The Aino, Satio and Yari are scheduled for release in 'early Q4', which is Autumn time to you and me.