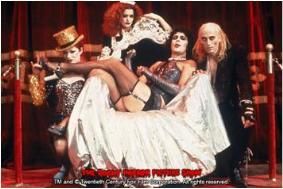 It's all part of Sky's planned week-long Musicals Season, presented by Michael Ball, the star of Hairspray: The Musical and due to be broadcast from October 20th-26th.

Get ready for singing transvestites and dancing nuns as, according to Sky, "musical lovers relive their favourite moments from some of the genre's best-loved films". It doesn't get much camper than this.

The Musicals Season will include 18 high-definition musicals on the new Sky Movies Modern Greats HD channel, with highlights including Love Me Tender and Funny Face.

And to cap it all, Michael Ball will feature in a half-hour special in which he talks about his career and favourite musical moments, as well as share behind-the-senes footage from Hairspray. Can't wait. Set your Sky+ recorder now.

The listings in full:

Grease
Prim new girl Sandy causes a stir at Rydell High when T-Bird stud Danny falls for her. John Travolta and Olivia Newton-John are the teenagers born to hand jive. (1978)

The Best Little Whorehouse In Texas
The story of the Chicken Ranch and the fight to close it down. Dolly Parton and Burt Reynolds lead the cast in this merry musical romp. (1982)

Dreamgirls
Soul trio The Dreamettes hit the big time as backing singers to Eddie Murphy. But fame has a price. Belting musical with Beyoncé and Academy Award-winner Jennifer Hudson. (2006)

The King And I
Classic Rodgers and Hammerstein musical. Deborah Kerr is the English widow who moves to Siam to teach the royal children and slowly falls for King Yul Brynner. (1956)

Carousel
Troubled soul Billy Bigelow (Gordon MacRae) is given the chance to leave heaven for one day to help his family back on Earth. Glorious Rodgers and Hammerstein musical. (1956)

Doctor Dolittle (1967)
Rex Harrison talks to the animals as he leaves his quiet English practice in search of the Great Pink Sea Snail. Classic family comedy with Richard Attenborough. (1967)

The Pirates Of Penzance
Kevin Kline makes only his second film appearance, repeating his award-winning Broadway performance in this dashing revival of the Gilbert and Sullivan swashbuckler. (1983)

Love Me Tender
Elvis is the youngest of four brothers in this musical drama. When his siblings head off to fight for the Confederates, he falls for one of their girlfriends. (1956)

Louisiana Purchase
A stylish, colourful New Orleans and the music and lyrics of Irving Berlin. (1941)