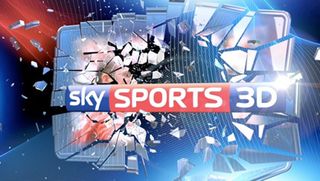 Sky Sports reaffirmed its commitment to producing 3D content across its line-up of sports programmes, despite the lack of support the medium is receiving from other broadcasters.

Sky also revealed it was testing and viewing 4K video content but that it was "just a little bit soon for now".

With BBC and ESPN blaming a "lack of public appetite" for dropping 3D, Sky insisted it wasn't looking to scale back its own 3D content, and was instead looking to improve and expand its Sky Sports 3D coverage to more sports.

Steve Smith, director of Sky Sports Production, told whathifi.com: "We're only at the beginning of really working with 3D technology, pushing the boundaries of what it does and what it delivers. So we learn on each production that we do... and move forward."

Smith asserted that 3D viewership "is still growing", and that Sky "now has more viewers on our [3D] platform than ever before."

Smith said Sky was looking at other sports for 3D, such as boxing and rugby league, and that the volume of 3D content for football this season would "be comparable to the last couple of seasons".

Despite BBC and Sony teaming up to produce 4K content recently at the Wimbledon Tennis Championships, Sky was non-committal on guaranteeing any sort of timeline for 4K TV, adding that "as with all future technologies [Sky] will evaluate it and see where we can get involved."

Paul Fuller, creative director Sky Sports, reiterated the interest in 4K but added it was too soon for Sky: "When I first saw HD it was on a 26in screen and I didn't get it. Then I saw it on a 50in screen and I got it. I'm lucky enough to have seen 4K and I get that too... It's just that little bit soon for now."