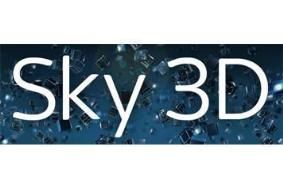 Available at no extra charge to all Sky+HD customers with Sky's top TV package – and of course a 3D TV – Sky promises a variety of content, including an average of three live sports events each week.

The channel kicks off with live 3D coverage of the Ryder Cup from Friday 1st to Sunday 3rd October. This will be followed by football, including the Manchester, Merseyside and north London derbies in October and November.

Boxing fans will be able to feel every punch of the David Haye vs Audley Harrison fight thanks to Sky 3D, while there will be rugby union internationals to look forward to in November.

But it's not just sport that gets the 3D treatment, movies such as Ice Age: Dawn of the Dinosaurs, Monsters vs Aliens, Alice in Wonderland and Bolt, as well as pay-per-view offerings including A Christmas Carol.

Sky 3D's Channel Director John Cassy says: “Sky 3D will totally change the way entertainment is viewed in homes across the country. We see 3D as ‘Event TV', an opportunity for people to share an incredible visual experience in their home, watching some of the biggest and best television available including; live sport, movies, entertainment and arts programmes.

"When people gathered round their new television sets to watch the Queen's Coronation broadcast in colour, little did they know that in years to come images would eventually be leaping from their television screen with the introduction of 3D. The launch of the channel is the just the beginning, 3D has arrived and will change TV forever.”

If you have a 3D TV – whether passive or active, and no matter which manufacturer's badge is on the front – and so long as you have Sky's top HD TV package, you could be enjoying live broadcast 3D content at home from today...