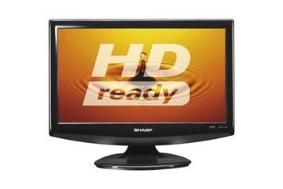 First-up is the LC-19D1E, which is unsurprisingly a 19in set. Selling itself as ideal for movies and games – kid's bedroom, perhaps – the TV has HDMI and PC inputs, alongside a claimed 7500:1 contrast ratio.

There's a 1366 x 768 resolution panel packed in to the ultra-compact frame, which stands just 36cms tall including the stand, as well as a digital Freeview tuner.