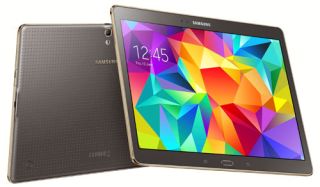 Samsung has unveiled its new Galaxy Tab S tablet line-up. Targeted at the higher end of the tablet market, the Galaxy Tab S range comprises 8.4in (pictured below) and 10.5in (pictured above) variants.

Both tabs are fitted with 2560 x 1440 Super AMOLED displays – screen technology Samsung previously only used in its smartphones – which will aim to rival the Retina display found on the Apple iPad Air.

Samsung has also included its Adaptive Display technology, which adjusts gamma, saturation and sharpness depending on what app is being used, the colour temperature of the environment and ambient lighting. That's the plan at least.

Designed to be portable, both tablets are just 6.6mm thick. Both are lightweight too: the 8.4in weighs 294g, while the 10.5in is just 465g for the wi-fi only version. Cosmetically, the Galaxy Tab S resembles the recently released Galaxy S5, with Samsung opting to use a perforated rear panel.

The Galaxy Tab S tablets come bundled with a range of Samsung apps and services, including its new Papergarden magazine service.

Samsung has also formed a partnership with Marvel, offering users three months of unlimited free membership to the Marvel Unlimited app, granting access to over 15,000 magazines.

Other features include Call Forwarding, which allows users to make and receive calls from their phone, on the tablet. Samsung's multi-window, multi-tasking feature is present once again, allowing users to carry out up to four tasks on one screen.

A Multi-User does what the name suggests, and allows several users to have their own, customised profiles. Each user can gain access to the Galaxy Tab S via a fingerprint scanner built in to the home button.

The Samsung Galaxy Tab S will come in wi-fi only and wi-fi with 4G LTE variants and with storage options of 16 or 32GB. Two colour options are available too: Titanium Bronze or Dazzling White. The Galaxy Tab S will be released to select markets next month (July).