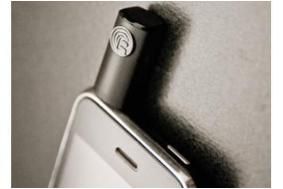 Selling for $49 (£32), it's a miniaturised version of the original RedEye system, which we covered in a blog piece a few months back.

But whereas the original used a base-unit to send commands to your components, and worked over a wi-fi network, the Mini is not much larger than a headphone plug, and takes both power and control signals from the Apple players' headphone socket.

Using an expanded infrared code database, covering over 45,000 codes from more than 1200 manufacturers, the unit, which comes complete with a keyring case, works with the latest version of the RedEye app to control either the functions of a single device or sequences of commands.

It has a range of almost 10m, has high-resolution menu buttons for use on the iPhone 4, and is completely customisable.

What's more, ThinkFlood is working on the next stage of its RedEye programme, which will see the launch of a browser-based control able to run on home computers and 'drive' a complete system. More details on that one when it's available.