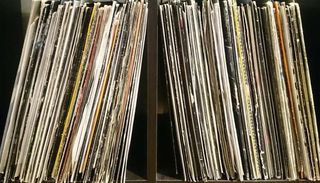 Remember, remember the 25th of November. Not for any treason, or gunpower, but for something far more important... Black Friday.

And the people behind Record Store Day are once again getting in on the action for 2016 with a "kick-off to the season of gift-giving (and gift-wishing)". As the RSD organisation says, "if America is going to go crazy buying things to wrap up, then record stores need to be part of that". Fair enough.

A host of limited edition records have been announced in the US, with artists featured including Alice Cooper, The Beach Boys, Disclosure, Jimi Hendrix, Prince and The Rolling Stones. As ever, you need to find your local participating record store to get your hands on the releases. Check the Record Store Day website (US/UK) for more information.

The UK Record Store Day organisation followed suit last year, so we'll keep an eye out for news of any Black Friday vinyl deals on this side of the pond.

As ever, keeping track of all the best Black Friday deals is likely to be a difficult (nightmare?) task, so we'll be doing our best to take that burden off your hands with our round-ups of the best Black Friday and Cyber Monday deals, with a focus on our favourite home entertainment products.

If you'd rather have discounts sent to you directly, you can sign up for our dedicated deals newsletter.

MORE: You can play a vinyl record with the new £5 note but probably shouldn't

You can find a full list of the titles here, which includes Jimi Hendrix's Morning Symphony Ideas, The Stone Roses' Sally Cinnamon, Jethro Tull's Ring Out, Solstice Bells, and a lot more.

While not all vinyl will be available everywhere, but you can find out which of your local stores will be participating via Record Store Day's store locator.

This opportunity to get your hands on some great vinyl follows the main Record Store Day event that took place in April; while in 2015, overall sales of vinyl went up a staggering 742 per cent.

Of course, if you want to take the day as an opportunity to get into vinyl, and don't have anything yet to spin your records, we have some recommendations.