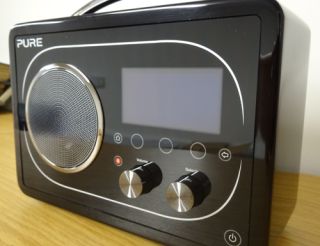 The latest product to be released by radio experts Pure is the Evoke F4, an FM, digital and internet radio with Bluetooth streaming, yours for £170.

The Pure Evoke F4 can also form a multiroom system with other Pure devices, enabling you to sync music playback around your home in multiple zones.

Bluetooth is also on board this new Evoke radio so you can stream music directly from compatible phones, tablets and laptops, and access 20,000 internet radio stations and 200,000 on demand programmes.

The F4 can also stream over 15 million music tracks from the Pure Music subscription service.

As with other Pure devices, you can also use the tag button to find out the track and artist as you listen to new music. Tracks can then be bought there and then via the radio or added to a Pure Music playlist.

Other features include recording of live radio to a USB stick via the USB input, an input for smartphones, MP3 players and any other devices, a headphones socket and compatibility with the Pure F1 battery pack that gives 12 hours of battery life per charge.