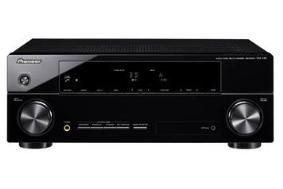 All of the new models (aside from the entry-level VSX-420) can be enhanced with wireless Bluetooth audio streaming and are capable of supporting 3D via the latest HDMI version 1.4 connection.

All but the cheapest two models are Works with iPhone certified too and thanks to the Pioneer iControlAV app you can use your iPhone or iPod Touch to fully control your receiver.

Dolby TrueHD and DTS-HD Master Audio decoding is on board all but the entry-level model, as well as Dolby ProLogic IIz height channel processing.

The VSX-920, VSX-1020 and VSX-1025 feature the new Pioneer-developed Sound Retriever AIR specifically developed for use with Bluetooth sources, as well as internet radio.

All the new models are due to be in shops by June and we'll look to bring you reviews of the kit just as soon as we can.

Pioneer has put down a marker in the home cinema receiver value stakes, with two new models launched this week in the States.

The entry-level model is the VSX-520-K, which offers 5x110W output and that HDMI 1.4 capability on its three inputs and one output for 3D pass-through, but not the Audio Return Channel facility possible in 1.4.

Bluetooth is built-in, with a Pioneer AS-BT100 Bluetooth adapter available for an additional $99, and the '820 also has a front-panel analogue input on a 3.5mm socket.

The pricier VSX-820-K ($299/£200) adds an extra HDMI input, and a USB socket with full iPod playback/control capability. It has full Works with iPhone certification, and an iPhone Control Button allowing navigation of the device to be switched between player and receiver.

Other extra features include MCACC set-up and a port for the connection of a US-market Sirius radio receiver.

Both models are finished in gloss black, and require the addition of an external power amp to give the full PLIIz effect. Pioneer is expected to announce further models, with 7.1-channel amplification, in the next few days.

No details are yet available of the European availability of these models, or their equivalents.