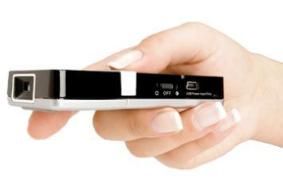 It's been some three years in the making but finally Optoma has released the product which it hopes will revolutionise the world of projectors.

Aimed at a new lifestyle market, the Pico will sell for just £249 and aim to bring DLP projection technology to the masses.

Weighing just 115g, the Pico is battery-operated, claiming a battery life of up to 2 hours. This is recharged via mains power or a USB connection.

The AV connection is a simple 2.5mm jack socket, capable of dealing with a 576i/480i video signal. To complement the video there's also a 0.5w speaker for sound.

Optoma made no bones about the Pico's need for a darkened room, with its 1000:1 contrast ratio struggling in a bright room.

Due for release on November 1st, the Pico will set you back £249.