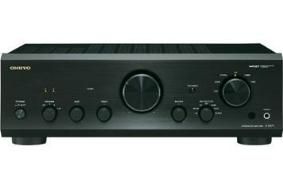 And this month will also see the launch of Onkyo's new budget stereo amplifer, the £300 A-9377.

The A-5VL delivers 2 x 40W, has an onboard DAC using Burr-Brown (PCM1796) 1923kHz/24-bit chipsets. This can be used to upgrade the performance of an older CD or DVD player plugged into the amp, or to boost music streamed from a PC or Mac via devices such as Apple's Airport Express.

And the A-5VL is compatible with Onkyo's range of optional iPhone/iPod docks such as the DS-A3 (£100).

Designed to partner the A-5VL is the C-S5VL SACD/CD player. It's equipped with a Wolfson 192kHz/24-bit DAC, DSD Bitstream support for playing SACD discs, a digital filter control, phase control and a headphone jack with independent volume control.

Last, but by no means least, comes the entry-level A-9377 stereo amp. This delivers a claimed 2 x 90W, has defeatable tone and balance controls, a MM phono input, preout terminals for adding extra power amps, headphone jack and remote control.

Like the A-5VL, it's fully compatible with Onkyo's range of iPod docks.