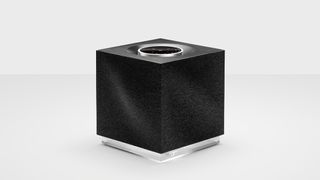 With Naim’s launch of the second-generation Mu-so in May, it was only a matter of time before the smaller speaker in the two-member Mu-so family got a refresh too.

The Mu-so Qb 2 is the next-generation version of the original Qb, which arrived in 2016 sharing the same design and features as the 2014-launched Mu-so but in a more compact and affordable form.

Like father, like son, the Qb 2’s update largely mirrors the Mu-so 2’s, bringing it in-line with its sibling on most (all but sound) fronts – which should bode well for the cubic speaker considering the five-star fate of the Mu-so 2.

Needless to say, it’s had more than just a lick of paint.

Like the Mu-so 2, the Qb 2 now leverages Naim’s latest hi-res, multi-room streaming platform, which is featured in the brand’s Uniti range and dedicated network players (all the way up to the £20,000 flagship ND 555), and which gives the owner access to their networked music (up to 32bit/384kHz), a host of music services (such as Spotify and Tidal) and internet radio.

AirPlay 2 and built-in Google Chromecast (and the multi-room options they both offer) rounds out the exhaustive network connectivity list, while offline means of playback is via Bluetooth and USB, optical and 3.5mm inputs.

The illuminated volume dial, which doubles as a touch control panel, and which was “worth more than a passing mention” in our Mu-so 2 review, is present and correct. A rather chic command centre, it is where you can change volume, switch sources and select up to five presets. A proximity sensor means the display can be awoken with a hand and illuminate the icons ready for use. Alternative means of control is via the Naim app and new remote control. The Qb 2 is Roon Ready, too, for subscribers of the music platform.

New drivers, designed in collaboration with Focal and Naim’s VerVent Audio associate, sit inside a familiar-looking yet optimised burnished grey aluminium chassis, which, as with its sibling, can be customised with optional replacement grilles in Olive, Terracotta or Peacock colourways. Armed with a DSP supposedly more than 10 times more powerful, too, the Qb promises to complement those driver upgrades with greater sonic accuracy on the processing side.

Like its sibling, the Qb 2 is pricier than its original to reflect the revamp, although a free 90-day trial of Tidal HiFi subscription (usually £20/month) may soften the blow... even if by just a touch.

With the affirmed success of the Mu-so 2 we look forward to hearing how its sibling compares – not only within the Mu-so family but also with a broader mid-market competition that has certainly grown and evolved in the three years since the Mu-so Qb was first welcomed into the world.