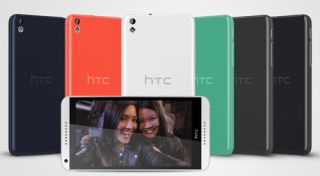 HTC has taken the wraps off its new Desire 816 midrange smartphone, a metallic mobile that borrows from the flagship HTC One but sports a bigger screen and smaller price tag.

HTC stopped short of announcing its new top-of-the-range phone, which has been given the codename HTC M8, at MWC 2014, instead revealing a new midrange device.

That said, the HTC Desire 816 has a fairly healthy specification sheet. A 5.5in HD screen with a 1280 x 720 resolution screen is powered by a quad-core 1.6GHz processor.

The design mirrors that of the HTC One, with a "fresh interpretation of the classic, premium metal design" of the One range, which once more rather puts the plastic casing of the brand new Samsung Galaxy S5 to shame.

Due for release later this spring, there's no official word on pricing for the HTC Desire 816, though it should come in noticeably cheaper than the 2014 flagship phones.