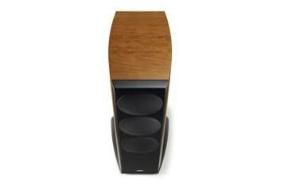 The £6000-a-pair speakers, the result of three years' development, are set to sit at the centre of the new range, with smaller, less expensive versions on the way along with ultra high-end reference models.

And while the speakers may look more conventional than Naim's multiple-enclosure designs of the past, the same principles of isolation are followed within the sleek cabinets, with separate housings for the different sections of the speaker, and the crossover mounted in the plinth of the speaker, from which the main cabinet is decoupled using leaf-springs.

But the single most striking element of the design is the use of Naim's own Balanced Mode Radiator in place of a more conventional tweeter. This flat-diaphragm driver, mounted in its own massive tube which is again decoupled from the main enclosure with leaf-springs, covers an extremely wide frequency range.

In fact, the BMR goes right from mid-bass all the way up to the kind of frequencies only the very young can hear, avoiding the need for a crossover in the middle of the vital 'voice' band. Instead the crossover is at 380Hz, and the speaker has a frequency response of 28Hz-35kHz.

The BMR driver itself uses a Nomex/paper honeycomb diaphragm and twin neodymium magnets, and is mounted in an aluminium tube with walls 12.7mm thick, suspended using twin circular-plate leaf-springs: one at the front, one at the back.

The bass drivers are twin 20cm units with paper cones and 5cm voice coils, built on pressure die-cast chassis, and are said to deliver 'linearity previously only dreamed about'.

The cabinet itself is of a multi-density MDF laminate designed to be self-damping, while the sloped top of the sealed enclosure is there to minimise standing waves, as are the curved sides. And while the speaker is single-wired as standard, it's designed for easy conversion to active operation.

The speaker has also been built to be easy to set up and position, which is not something that could always be said of Naim's previous multi-enclosure designs.

Mind you, at 61kg each, we'd suggest you get a friend to help you, though the speakers are packaged with a castor system attached, allowing them to be rolled into position before they're settled on their substantial steel spikes.

The Naim Ovator S-600 comes in a choice of four real-wood finishes.