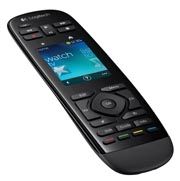 Blaming poor sales despite the launch of more upmarket devices, Logitech is to pull out of the remote control business.

The process to divest the company of its Harmony remotes is already underway, company president and CEO Bracken P Darrell saying that such products 'no longer fit with our current strategic direction.'

Also on the way out are 'other non-strategic products, such as speaker docks and console gaming peripherals', which will be removed from the company's line-up by the end of this year.

The move comes as Logitech announced sales for the last three months were down 14% on the same period in 2011, giving the company a net loss for the quarter of $195m (£123m), against a net profit of £55m (£35m) in the previous October-December.

Despite having bolstered its Harmony range with more sophisticated and upmarket products, such as the Harmony Touch (left) it introduced just three months ago, Logitech has seen sales in the sector falling.

Year-on-year, Harmony remote sales in the last quarter of 2012 were down 24% by value, and 55% by quantity, reflecting that shift to higher-priced products.

However, the shift away from selling lower-priced remotes hasn't paid off: sales of the high-end models rose just 4%.

Darrell says that 'We are taking immediate actions to shape a faster and more profitable Logitech [by] developing more mobility-related products, leveraging the powerful growth of tablets and smartphones.

He added 'I was pleased with the continued strong demand for our Ultrathin Keyboard Cover in Q3.

"We plan to expand our presence in the growing tablet accessories category with the launch of a number of exciting new products later this quarter.'