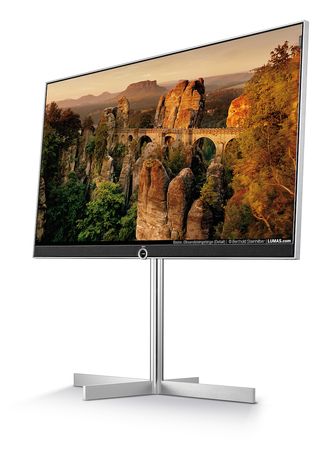 This is the new Reference series 4K TV from German manufacturer Loewe, and it's packed with high-tech features. Inside the minimalist design is an eight-speaker, 120W sound system, a 1TB hard drive for pausing, recording and archiving content, Bluetooth and DLNA connectivity as well as a Dolby/DTS decoder.

There's an iOS/Android smartphone app for remote recording to the hard drive, and a 'second screen' tablet app for viewing content from the TV on your portable device.

The on-screen user interface has a customisable homepage and you can buy the TV in aluminium black, aluminium silver, high-gloss white or dark gold. A motorised floor stand is optional.

MORE: 4K TV, Ultra HD: everything you need to know

A built-in soundbar with front and rear drivers delivers "virtual 3D surround sound" without the need for additional external speakers, says Loewe. If the customer does want to add a 5.1 system, the soundbar can act as the centre speaker.

The hard drive can act as a PVR, and content on it can be accessed by other Loewe TV sets in the home, a feature known as DR+ streaming.

The set is initially available with a 55in screen for £3800; Loewe says it will add 85in and 75in Reference models to the line-up in August and September respectively.

They join existing 4K models in the Loewe range, including the Art series (starting at £1299 for 40in) and Connect models (starting at £1999 for 40in). An all-new flagship, the Masterpiece, is expected to join them towards the end of this year.