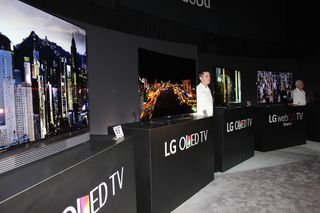 The country's labour ministry has told the manufacturer to stop the OLED panel production line in order to let authorities investigate the incident.

The OLED TV panel production line has now been suspended by LG Display. An LG Display spokeswoman confirmed the news but declined to comment further on the potential impact on the wider business, Reuters reports.

LG Display is the largest manufacturer of LCD panels in the world and also makes OLED and flexible panels. The company was originally a joint venture between LG and Philips but became part of the LG Group after Philips sold off all its shares in 2008.

LG took to the stage at CES 2015 to announce the expansion of its OLED TV line-up for 2015, with seven new models due for release – all of which will be 4K.

The manufacturer has high hopes for OLED TV this year, having ended production of plasma TVs late last year as it shifted its focus to the development of curved, flat and flexible OLED screens.

OLED wasn't the only notable TV star of CES 2015, however; Quantum Dot, Dolby Vision and High Dynamic Range also staking their claim to be the TV technology that captures our focus in 2015.