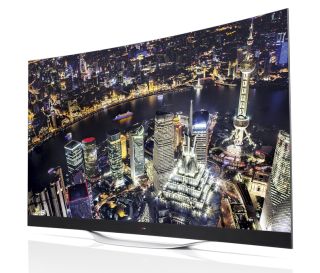 LG used its early morning breakfast briefing here at CEDIA Expo 2014 in Denver to launch its first curved OLED 4K screens for the US market, the $9999 65EC9700 and $24,999 77EG9700 (pictured above). We saw the early prototypes at CES back in January, but these are the finished production models.

Both sets are, according to LG, "the finest TV sets we can make". They feature LG's WRGB OLED technology, with each pixel made up of four sub-pixels to create roughly 33 million pixels to produce "the most lifelike colour and level of detail," the company claims.

The screens are just 4.5mm at their thinnest point (the depth of a few credit cards), have a gently curve to the screen and a bezel-less design. The latest HDMI standard and H.265 decoding are part of the spec so both TVs can handle 4K content from the likes of Netflix.

LG says the 65in model will be available in the US in October, with the 77in flagship following in November. There's no word yet on UK pricing or availability.

As for the rest of its TV range, LG says it will have a total of 16 4K sets in 2014 (OLED and LED) and that it is working with audio specialist Harman Kardon to improve the sound quality of its flat and curved TVs.

"The market for Ultra HD is exploding," says LG. "It took 10 years to reach sales of one million CRT colour TVs when they were introduced, we predict that sales of 4K TVs will reach one million in their first year [2014]. We're predicting sales of three million units in 2015, and double that in 2016."