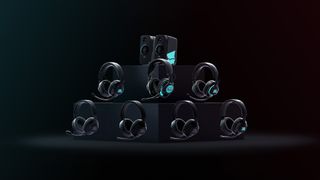 There aren't many audio markets that JBL doesn't already dabble in, but at CES 2020, the manufacturer has chosen to launch into a brand new arena - gaming headphones.

The flagship is the JBL Quantum One ($299.95), which uses JBL QuantumSphere 360 sound technology. This sound processing combines special algorithms with integrated head tracking sensors to allow players to "hear enemies and movements around them like never before".  You can use them wirelessly or via USB-C or USB Type A, while these headphones (plus the Quantum 800s) also feature active noise-cancelling.

The Quantum range works across a range of systems, including PC, Mac, Xbox, PlayStation, Nintendo Switch, VR and mobile devices.

Launching alongside the new gaming headphones, JBL has also unveiled the Quantum Duo (£149.99/$149.95, on sale ) PC gaming speakers, complete with exposed drivers and colourful lighting effects. They support Dolby Digital surround sound and connect via an audio input or USB.

The JBL Quantum range of gaming headphones and the Quantum Duo speakers will hit stores during April 2020.