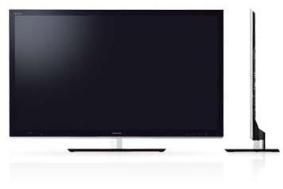 It's part of an ambitious effort to increase its market share in the competitive TV sector: the company is targeting global sales of 15m sets this financial year. If achieved, that would be a 50% increase year-on-year.

Toshiba is aiming to position the sets firmly in the more stylish end of the market, and has been working with Danish design house Jacob Jensen to produce the new models. The styling is characterised by the simplicity and clean lines of the TVs, which are just 29mm thick.

They use LED-backlit 240Hz panels, and claim a 2000000:1 dynamic contrast ratio, while other facilities include DLNA capability, web connectivity, four HDMI inputs and the option of adding on a USB hard drive for off-air recording.

While it's not alone in going for designer looks, Toshiba is also majoring on the environmental appeal of the sets: the 46in F1 is said to have an annual power consumption of 160kWh, making it one of the lowest-energy 3D sets on the market.

And that slim screen will cut down on packaging, too, Toshiba saying that the box for the 46in TV is 33% lighter than that for a conventional set of the same size.

The exact timing for European availability is yet to be announced.