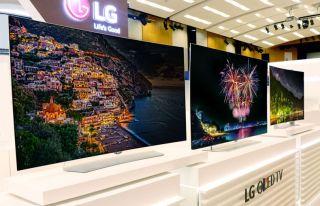 Some of the screens were revealed at CES, but it seems they're now ready for release. LG says the new 4K OLED TVs will be "available starting at the end of August" in the UK, Germany, Korea and US.

LG claims both the 'EG9200 and 'EG9100 are "thinner than any smartphone on the market" and come complete with a barely-there super-slim bezel. There's also a new "shimmering transparent" stand.

We'd like to think anyone shelling out on an OLED TV will treat it to some external speakers but Harmon-Kardon have been involved in making the best of the TV's own speakers.

Lee In-kyu, senior VP and head of the TV division at LG, said: "Anyone who sees our newest TVs at this year’s IFA will walk away without a shred of doubt that HDR and OLED complement each other perfectly."

We'll be reporting live from IFA next week, so we'll be sure to see how that claim stacks up...