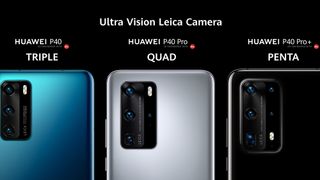 Despite the Coronavirus pandemic, Huawei has gone ahead with the launch of its next generation of flagship smartphones, the three-strong P40 Series.

Huawei's P30s arrived in March 2019 as among the best camera phones ever made, and the Chinese brand looks to continue that legacy with some impressive-on-paper camera tech.

The P40 has a triple-camera lens comprising 50MP and 16MP wide angle and 8MP telephoto snappers. The four-lens P40 Pro expands on that with 50MP and 40MP wide angle lenses complemented by 12MP 10x optical zoom telephoto and Time-of-Flight (ToF) cameras, while the P40 Pro Plus represents the pinnacle of Huawei cameras with a five-lens array – 40MP and 50MP ultra wide, 8MP 10x and 3x optical zoom telephoto and ToF cameras.

Each features a 32MP front camera, with the P40 and P40 Pro benefitting from additional ToF sensors too.

The P40 Series runs Huawei's EMUI 10.1 OS, which goes without Android apps such as Google Play Store, Google Maps, Google Chrome and YouTube as well as Google Assistant voice control. That may well make the handsets a difficult sell outside of China, although Huawei says its software platform will continue to grow to feature more alternative apps.