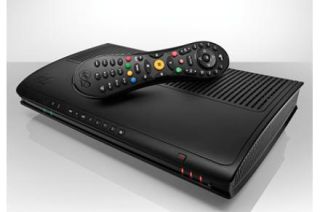 We've been waiting quite a while for Virgin's new TiVo HD service to come on stream, and today the man from Virgin finally arrived with a new set-top box to plug into my home AV system.

Selling for £199, plus £26.50 for the XL TiVo package bringing over 160 channels of TV, the new box has three tuners (Sky+ HD has two), allowing two channels to be recorded while a third is viewed, and is backed up with a library of 4600 hours of TV, music and movies on demand.

The system makes use of dedicated channels of bandwidth on Virgin's digital network and a built-in dedicated 10Mbps cable modem, ensuring users can surf the web and watch TV at the same time without interruption, and brings TV in standard definition, HD and 3D.

Installation took about an hour, with the software taking around 40 minutes to upload to the box once it was connected to our Virgin cable network.

The engineer explained that we should leave the box on for now, as it can take up to two days for all the content to load itself.

So what does the new TiVo box offer that the old V+ didn't? Well for starters it has a 1TB hard drive rather than the meagre 160GB on the old box, which was forever filling up quickly with the amount of HD programming we were recording.

Shouldn't be a problem on the new box, which can store around 100 hours of HD content, or 400 hours of standard-definition material.

There's also a much slicker implementation of BBC iPlayer, and a limited number of apps for the likes of YouTube, eBay and Twitter so you can access your accounts via the TV once you've set them up online at www.virginmedia.com/mytivoapps. More apps are promised in the future.

Also on the menu is 3D, although at this point the amount of material is mainly limited to some short demo clips for customers with the XL subscription package.

As for high-definition programming, there's certainly a lot more than Virgin used to offer, but it's still some way off Sky HD's 50+ channels.

But the biggest improvement is the inclusion of TiVo technology. For those not familiar with it, it's been a big hit in the States but less so (so far) over here.

Essentially TiVo analyses your viewing habits and the box uses smart technology to record automatically shows it thinks you might like. Very nifty. You can help it decide which programmes you like by using the thumbs up/thumbs down button on the remote (see below).

Press the thumbs up button three times and it will record similar genres of programme to the one you've rated highly; give a programme three thumbs down and it will know not to record that type of programming.

Of course, you can set recordings manually or using the series record link in the normal way too.

Choose a programme to record yourself and the device will come up with further "If you like this..." suggestions. We set Silk to series record on BBC One and it suggested Waking the Dead and Monroe as other shows we might like to watch.

Not a bad match, as they're both shows I enjoy and have recorded in the past.

As with Sky+, you can also set recordings from your computer or smartphone via Virgin's online TV guide, provided your TiVo box is switched on.

Go to www.virginmedia.com/tvguide, log in to your account and you'll see an on-screen version of the EPG. Find the programme you want, click on it and then select 'record this episode' or 'record the whole series'. If successful, you'll get confirmation that the recording has been sent.

Search on the electronic programme guide (EPG) is also vastly improved over the old V+ box. You can search content by show, theme, actor or director, and you can even create a wishlist of programmes to be recorded when they become available.

Even better, the catch-up services allow viewers to scroll back up to seven days, making it a simple extension of live TV viewing. And if you see that little 'C' symbol next to a programme on the EPG (see pic below), it means other episodes are available on catch-up TV. Handy.

So far, the Virgin TiVo box is looking good, but we need to spend more time with it before issuing our final verdict. We'll have a full review in the June issue of What Hi-Fi? Sound and Vision, on sale from May 10th.