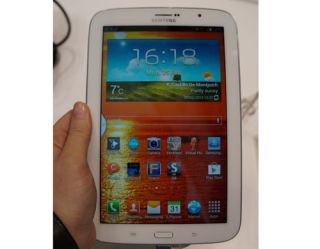 It was always going to happen sooner or later, and MWC 2013 was the venue for Samsung to unveil its rival for the iPad mini, the Samsung Galaxy Note 8.0.

The middle sibling in the Note family, the Samsung Galaxy Note 8.0 offers - if you hadn't guessed - 8in screen, putting it squarely in competition with the 7.9in iPad mini.

Of course, this isn't the first time Samsung has targeted the smaller tablet market. Last year's Galaxy Tab 2 7.0 was fairly well received by the tech world, but got lost in the battle for small-tablet supremacy between the Nexus 7 and Amazon Kindle Fire.

Can the Samsung Galaxy Note 8.0 manage to stand out this time around, against one of the most powerful tablets on the market? We got hands on at MWC 2013 to find out.

Whether you see it as a large Note 2 or a smaller Note 10.1, the Galaxy Note 8.0 certainly follows Samsung's design language. Its shiny white plastic shell is certainly a love-it-or-hate-it feature - and we have to say we're not keen. It of course makes the tablet feel very lightweight, but in actual fact, the iPad mini with its more premium feel weighs in lighter at 312g vs the Note 8.0's 338g (both 3G versions).

It is also thicker than the iPad mini, measuring in at 7.95mm thick to the mini's 7.2mm. Hardly chunky, but not the most competitive when Samsung is being clear that it has the iPad mini firmly in its sights with the 8.0.

That aside, it sits well in the hands and its curved edges feel comfortable to hold. Samsung describes it as having a 'one-hand grip' size, but we found we were more inclined to have it rest on our palm than actually grip it.

It has just one physical button on the front of the display - the home button - and the usual two capacitive buttons either side, for going back and bringing up additional sub menus. On the left, you'll find the microSD card slot and on the right handside you'll find the volume rocker, power/lock button and an infra-red sensor for using the Note 8.0 as a universal remote control when in landscape more.

Despite this, it seems Samsung has the idea that you'll be using the Note 8.0 in a portrait position the most, going by its placing of the Samsung logo on the top of the device.

It'll rock Android Jelly Bean (version 4.1.2) out of the box, upgradeable to the latest 4.2 version after launch.

While its design might not be the most competitive, Samsung has put considerable work into the 8.0's screen. Its resolution isn't mind-blowing when you get really close, but it does pip that of the iPad mini - 1280 x 800 and 189 pixels per inch, compared to 1024 x 768 and 163ppi.

We watched a couple of videos on the screen and it certainly had the Samsung tendency to oversaturate colours to make the screen look bright, vivid and impressive. The lower-res screen is certainly noticeable compared to the range of 1080p tablets we've been seeing at MWC 2013, but will ultimately do just fine for movie watching on the go.

The Galaxy Note 8.0 features a 1.6GHZ Exynos quad-core processor and 2GB of RAM, meaning it felt pretty speedy when playing games, swiping and browsing, with no noticeable lag.

It'll offer 16GB or 32GB of storage, with microSD card slot for expanding up to an extra 64GB should you need it. Bluetooth 4.0 connectivity is on board too and you can get the Note 8.0 in wi-fi only or with 3G connectivity.

Battery life is something we'll have to wait for a full review sample to test, but its battery is a 4,600mAh, which just edges out the iPad mini's 4,400mAh - on paper at least. If the iPad mini is anything to go by, this would suggest at least 10 hours of browsing or video watching before you'll need to recharge.

The S Pen stylus has always been a part of the Note family, and so it appears on the 8.0 as well, where screen size feels just right for the S Pen functionality. Handwriting recognition works well, and thanks to improved pressure sensitivity, there is no lag - it's just as if you're writing on a pad of paper.

Inexplicably though, Samsung has added an ear speaker to the Galaxy Note 8.0, suggesting it thinks people may actually use this as a phone that someone holds to their ear. We're all for enabling cellular connectivity to a tablet for voice calls via a Bluetooth headset or speaker, but this just seems a little - well - ridiculous.

As for video calling, there's a 1.3MP front-facing snapper, supported by a 5MP camera on the back. We tested it out and it produced a fair quality photo of static objects in good light - add movement and it struggles a little more. But then - who takes photos with their tablet, anyway?

The Galaxy Note 8.0 is due to launch in Q2 but there's no mention of a concrete release date or a price yet.

We'd say Samsung has to hit the sub-£300 mark in order to make a dent in this market, but going by the £400+ SIM-free pricing of the Note 2, this may be wishful thinking.