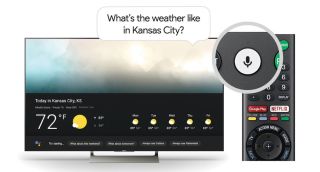 Admit it, you’ve talked to your TV before. Yelled at it, even, or at least directed a statement to someone on it. “You can run faster than that!” “Don’t go in there!”

Now, though, you can have more meaningful conversations with it than before thanks to built-in personal assistants – if you own one of this year’s Sony 4K HDR TVs, such as the Sony KD-65A1 or Sony KD-55XE9305, or one of the brand's compatible 2016 models.

After performing a software update on their Sony TV, users simply have to push the microphone button on the remote and issue commands - whether that's searching for content or playing music, asking for general information or controlling compatible smart home products.

For example, you can ask Google Assistant to "Play Stranger Things" and it’ll open the TV show in Netflix; to find the most popular video on YouTube; to dim your lights or set your thermostat to a certain temperature.

Sony has also confirmed that Amazon Echo, Echo Plus, Echo Show and Echo Dot devices can now be used to interact with select Android TVs via Amazon’s Alexa voice assistant.

While voice-controlled wireless speakers have been dubbed 'smart speakers', the inclusion of the in-vogue feature on tellies (not only Sony's but also Toshiba's) is beginning to bring a refreshed definition to the term 'smart TV'. Perhaps they should be called 'super-smart TVs' instead.

Don't forget Black Friday is just around the corner, and you'll be able to keep track of all the best deals - featuring many TVs, we're sure – on our Best Black Friday deals page.

Smart speakers – everything you need to know