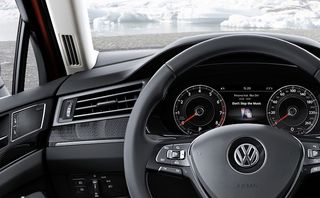 The Geneva Motor Show is in full swing, but it's not just new cars making the headlines - there are also plenty of new in-car audio systems being launched.

Earlier today we covered Bang & Olufsen's new system for the Audi R8 and now it's Dynaudio's turn in the spotlight.

Volkswagen will be offering the Dynaudio Confidence Speaker System as an optional extra for the new Passat Alltrack. The Confidence set-up is already available across the Passat family, so it's only natural that the newest arrival gets the option too.

The system comprises 12 speakers in total, and includes a dedicated centre speaker and separate subwoofer in the front of the cabin.

Power is a claimed 700 watts and the system comes with four different sound presets and a fully customisable user setting, so you can alter the sound to suit your own musical taste.

We've already experienced the fruits of the VW and Dynaudio relationship, having spent some time behind the wheel of the Golf Mk VII.

We were hugely impressed by the Golf's Excite Sound System, so we can't wait to hear what this step-up set-up, named after Dynaudio's high-end Confidence loudspeakers, has in store.