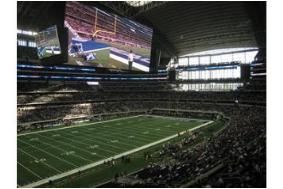 But Mitsubishi Electric has its sights on much bigger numbers. The company's Diamond Vision HD display boards at Cowboys Stadium, home of the Dallas Cowboys, are the largest case in point.

Weighing 600 tonnes, the screens are suspended 90 feet directly over the centre of the playing surface and stretch from nearly one 20-yard line to the other (if you know what that means).

“We have designed everything about Cowboys Stadium to provide an unequalled experience for our fans, and this screen is the centerpiece of what we have created for them,” he continued.