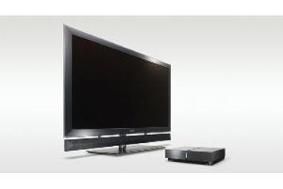 The full specification of the European model is yet to be confirmed, but the prototype the company is showing at CES gives some idea of what might be on offer.

As part of the company's commitment to introducing LED backlighting across its range, the TV on display uses 4608 LEDs in 512 areas to give what it calls Super Local Dimming. This allows the company to claim a dynamic contrast of up to 9,000,000:1 (compared to 5m:1 for the first-generation, Japanese model - of which more below).

Net Resolution+ allows upscaling and suppression of compression artefacts when viewing online content, and as well as being 3D capable, the TV is able to convert standard programming, user videos and games to 3D on the fly.

Both 46- and 55in models will be available, with pricing yet to be confirmed. The Autumn will also see the release of new, larger models (including a 65in design) in the US and Japan.

Toshiba is also expanding LED technology - both edge backlighting and full localised dimming - across four other TV ranges, and expects to be one of the first manufacturers to go all-LED-backlit, by 2012.

More on the new TV line-up in a forthcoming blog.

Originally posted 5.10.2009: Toshiba is claiming a world first with the launch in Japan today of its CELL Regza 55X1 LCD/LED TV.

At the heart of this flagship 55in set is Toshiba's CELL platform. It's a combination of the high-speed processing of the Cell Broadband Engine, developed for demanding multimedia applications, and Toshiba's advanced image-processing algorithms.

Toshiba claims its CELL platform has a processing capability 143 times that of its current top Regza TV, allowing it to support unrivalled high-definition image-enhancing capabilities including:

The TV also uses LED backlighting. The display is divided into 512 distinct areas, each with individually controlled LED backlighting which pushes luminance to 1250cd/m2, two and a half times the level of normal TVs.

A 3 Terabyte (TB) hard disk drive is built into the TV, with 2TB dedicated to Toshiba's CELL Regza "time-shift machine" – an HDD recorder to you and us.

It can simultaneously record up to 26 hours of programming on up to eight channels of digital terrestrial broadcasting. Users can search the hard drive by using the Toshiba's "roaming navigation" system.

This allows you to find and display information on recorded, current and future programmes by inserting an identifier – the title, person's name, genre or related keyword.

The Toshiba CELL Regza 55X1 combines a slim 55in LCD monitor and a separate tuner box with the built-in hard drive, both finished in smoked aluminium. It goes on sale in Japan in December. No UK release date or price has yet been confirmed.

For more pictures and video on this groundbreaking TV live from the CEATEC Show, click here.