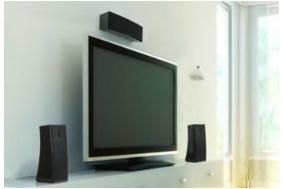 The line-up uses innovative drive-unit technology, has striking curved cabinets and is designed to be highly affordable: individual speakers start from under $200, and a complete 5.1-channel system will sell for under $1600.

The Motion speakers use a unique Folded Motion 'concertina'-shaped tweeter, said to be similar to the pleated tweeters found in high-end speakers. The tweeter has around eight times the surface area of a conventional 25mm dome design, giving wide yet controlled disperison, and is said to need just a tenth of a dome tweeter's excursion for the same output, giving minimal distortion and superfast response.

In the Motion speakers it's combined with powerful compact woofers and proprietary crossovers, all housed in enclosures based on acoustic concerns and coated in a high-gloss piano black finish.

In addition the Motion 4, the larger of two standmount models, uses a long tuned bass port folded back on itself – the Folded Motion Cascading Bass Port – to boost bass extension and level.

The speakers are also voice-matched with the company's electrostatic designs, so for example a pair of motion speakers could be used as the rear channels in a system with electrostatics on the front.

Two centre channel speakers will also be available when the range goes on sale in February: the Motion 6 is $300 and the Motion 8 $400.

The Motion speakers can be combined with MartinLogan's Dynamo subwoofers to create complete surround packages.

MartinLogan speakers are distributed in the UK by Absolute Sounds.