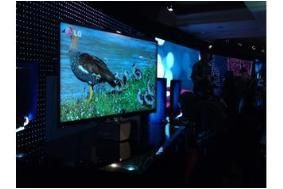 But there were plenty more surprises in store. At the heart of LG's 2010 TV line-up is the new Infinia range with Full LED backlighting, NetCast web connectivity on two thirds of its TV range, wireless HD video transmission (using a plug-in dongle) and, like Panasonic, the ability to make Skype voice and video calls on some models.

LG says the flagship Infinia models will also be 3D-Ready and will work with Sky's 3D TV service.

But the real star of the show is LG's Ultra-Slim model (pictured) which is a mere 6.9mm deep.

Other surprises included an 'eco' Chocolat smartphone with a solar charging panel on the back, a smartphone with built-in projector, and what LG claims is currently the world's largest commercial OLED TV with a 15in screen.

Wireless HD connectivity is a big theme here at CES, and LG's solution is to offer a wireless dongle that can transmit Full HD video at a range of up to 30m.

Not only its Infinia TVs but also its 2010 Blu-ray players will be network enabled for access to LG's NetCast portal, which includes widgets for Netflix, Yahoo, YouTube, Skype, Picasa and AccuWeather.

More from the LG launch at CES in our blog post