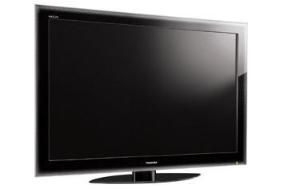 These come in the shape of the first sets with blaring-advert-taming Dolby Volume support, plus super-speedy HDMI handling and advanced video processing based on its CELL technology.

LED backlighting and 200Hz-style motion-handling are also on the agenda, and all 2009 Toshiba TVs meet Energy Star 3.0 energy-efficiency standards.

Interestingly, Toshiba has shunned the ultra-slim designs paraded by many of its TV rivals – arguing that 'no-one thinks regular flatscreens are fat', and that in cash-strapped 2009, few people will be prepared to pay the premium such super-slimline sets command.

Toshiba launches 'everyday' TV line-up
Continuing its emphasis on the affordable, Toshiba has split its TV lines into two – its Regza brand covers the higher-end models, with other 'everyday' sets coming in at lower pricing.

The new AV600 series are 'small sets with big features'. The 19- and 22in sets offer black-boosting dynamic backlight control, PC inputs, two HDMI inputs, a gaming mode and an audio out for easy connection to external sound systems.

New 'Lagoon' look for Regza TVs
Toshiba may not be going the super-slim look, but its 2009 higher-end, Regza sets have a smart new look, with a graduated 'Lagoon' finish.

Pixel Pure 5G and Resolution + are key to all the new models – advanced picture processing (based on higher-bit semiconductor) plus superior SD upscaling.

First up in the Regza range is the XV Series. A key feature from this range is Autoview, which adjusts your TV's settings (not just brightness, but contrast, gamma, sharpness and colour) depending on lighting conditions. It also adjusts to colour temperature, depending on the type of lighting you have.

The new Regza sets also promise faster HDMI switching, with Toshiba's InstaPort technology automatically handshaking all HDMI-connected devices as soon as you turn the TV on, rather than waiting for you to select a specific source.

ZV Regzas pack it all in
The 42-, 47- (shown) and 55in ZV models add ClearScan 200 (ClearScan 240 in the US), which uses backlight scanning to effectively double the frame-rate of the 100Hz set – a system Toshiba claims delivers '200Hz-effect performance' to smooth on-screen motion.

The sets are also the first TVs to feature Dolby Volume – the cunning audio-processing system that stops ear-splitting variations in volume as you change channels or a blaring advert break intrudes (without losing a TV show's natural dynamics). Dolby Volume has previously only been available in a handful of AV receivers.

Other notable Regza enhancements include an Expert Mode for professional installers (similar to but not based on the ISF calibration on some rival sets), plus USB and SD Card slots for easy access to digital content on the big screen. DivX support is also present and correct.

Flagship models feature 'Full Matrix' LED backlights
New flagship of the Regza range are the 47- and 55in SV670 sets. These feature infinity flush-front design - a single sheet of glass with anti-reflective coating – plus FocaLight: LED backlight with local dimming.

It's a Full Matrix LED backlight (vs edge LED designs used by some rivals, such as Samsung) – designed to offer black blacks without losing peak whites, Toshiba claims. If, for example, the sun is shining on a certain part of your screen, just that part can adapt to the lighting conditions.

Two-box CELL TV to support 'ultra HD'
Something that may appear in late 2009 – or possibly early 2010 – is an exciting new TV concept based on Toshiba's CELL processing (currently powering the Sony PlayStation 3).

The two-box CELL TV will feature an ultra-high resolution ( 3820x2180) LCD panel (with LED backlight) and a networked set-top box that acts as an HD server, allowing for recording and/or playback of up to six HD sources, simultaneously.

'It's time-shifting for the entire family,' claims Toshiba, adding that the next generation of Resolution+ upscaling involved will deliver 'the cleanest picture you've ever seen' - whether you're watching 1080p content or an internet download.

We've been promised a demo of the CELL TV tomorrow, and will report back on how it fares in action.

The new 19-, 22- and 26in models in black or white finish, to add to existing 15in designs. More on these in our home cinema section.

UK pricing and availability details will follow. In the meantime, here's a good idea of release dates and model numbers based on the US line-up: