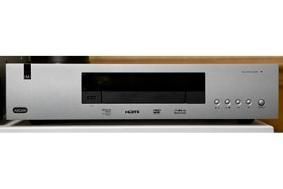 It's not the finished article, but rather a statement of intent from Arcam who are hoping to have the player on sale by the end of the year.

We first revealed the existence of the player in our recent Arcam blog when we visited the firm's Cambridge HQ, but this is the first time it's been seen in public.

Also showing at Bristol for the first time is Arcam's new FMJ AV888 and P777 multichannel pre/power combination. They're due on sale in May, at a provisonal price of £4000 for the preamp and £3000 for the power amp.

Naturally this mighty pairing will handle all the new high-definition audio formats, and the P777 will pump out 150W across all seven channels.

There's also a multichannel 7.1 input for playback of DVD-Audio and SACD sources, multizone capability and support for Arcam's rDock and rLead iPod connectors.

If you'd like to see more of what's under the bonnet, we've posted some more pictures in our Arcam blog.