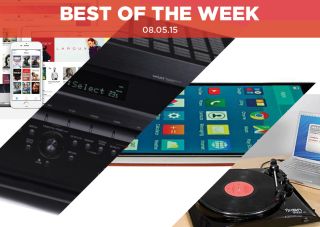 This week reports out of the US suggest that Apple is pushing to get rid of the free tier in music subscription services, John Lewis recorded bumper sales in the vinyl market and Oppo announced a pair of portable headphones.

On the reviews side we have plenty to regale you with including the LG G4 smartphone, Onkyo TX-NR3030 AV receiver and the Pioneer U-05 DAC.

It's also new magazine week with the June issue of What Hi-Fi? Sound and Vision. In it you'll find reviews of soundbases (both budget and premium), 4K TVs from LG and Samsung and a test of £500 floorstanding speakers.

The magazine is available at all good newsagents or, if you fancy going for the digital option, you can do that here.

Apple pushing for the end of free streaming music

Reports coming out of the US suggest that Apple is pushing to scrap the 'freemium' subscription level offered by Spotify and Deezer.

With Apple's own paid subscription service set to be unveiled at next month's WWDC event, the Cupertino firm's apparent attempts to dissuade record labels from offering music for free has attracted the attention of US government anti-competition agencies.

Turntable sales up 240% at John Lewis

Evidence of vinyl's uptick continues, with John Lewis reporting that turntable sales are up 240% in 2015.

There is a catch, though. The wares John Lewis offers aren't traditional turntables but all-in-one vinyl systems with USB decks spiking sales.

Still, it shows vinyl has more of a presence than it did even a year ago. At some point we're going to have to stop calling this a comeback…

The PM-3s feature planar magnetic drivers that, Oppo claims, offer greater accuracy and stability, and cut down on distortion.

Oppo also says that the PM-3s, designed with portability in mind, are the world's lightest closed-back cans.

The G4 is upon us six months after the G3 came out - and, like its predecessor, we like it very much.

The G4 has opted to go down the route of tweaks and improvements rather than implementing wholesale changes. With 3GB of RAM and a Snapdragon 808 processor onboard it's a phone that has the raw power and memory to make tasks quick and stable.

Battery management could be better, but being able to swap the battery out is a useful benefit that few rivals offer.

The last word goes to the real leather backing which is a change from the norm and feels pleasant to touch.

All in all, the G4 is an impressively capable smartphone. Highly recommended.

Onkyo hasn't reached its traditional heights with its recent AV receivers. Will the TX-NR3030 continue this recent run of being good but not quite the best in class?

Our first look at the uninspiring (though by no means unpleasant) design suggests more of the same. But fire the Onkyo up and it's clear this is a cracking AV receiver.

The Dolby Atmos set-up sounds fantastic but it's equally as comfortable with 5.1. Add to that a boatload of features and the TX-NR3030 proves to be an impressive statement from Onkyo.

The Pioneer U-05 DAC is one handsome piece of hi-fi.

Can its sound match the promise of its appearance? There's no question that when the U-05 gets going it's an appealing sound - clear, detailed and zippy.

Despite that, though, rivals are more engaging. The Pioneer is a tad less warm and refined but that shouldn't stop anyone from giving this DAC an audition.

Read the full Pioneer U-05 review