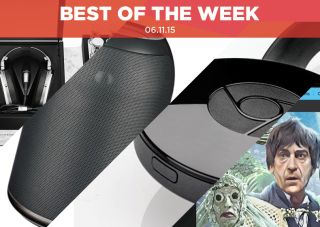 This week the BBC opened up its archives via its BBC Store, Sennheiser revealed the Orpheus headphone/valve amp combo and Arcam announced the 3rd generation of its Solo Movie and Music units.

On the reviews side, we had the second coming of Google's Chromecast streamer, Focal's first foray into headphones with the Sphear in-ear and the Ministry of Sound brought out the Audio M wireless speaker.

MORE: That Was Then... Denon D-M3 review

The BBC took another step towards a digital future by launching the BBC Store, an online shop that allows users to download individual programmes and complete series from the BBC's archives spanning 60 years.

The store will sit alongside BBC iPlayer, with most shows expected to cost in the region of £1.89 an episode or £6.99 a series.

You can see what's on offer as the store is live right now.

This is the new Sennheiser Orpheus

Sennheiser is celebrating turning 70, and after months of teasing a new product the German audio company has revealed its latest incarnation of the Orpheus.

This latest Orpheus – "a reference electrostatic headphone/valve amp combination" – has been in the making for ten years with Sennheiser using exotic, expensive materials to make the Orpheus possible.

MORE: This is the new Sennheiser Orpheus

There's a new Arcam Solo system… or two new systems to be exact, the 3rd generation Solo Movie and Music.

Both the Solo Movie and Solo Music are set to go on sale soon, with prices of £2000 and £1500 respectively.

The Tangent Fjord Mini is a stylish Bluetooth speaker for £150

Epson focuses on bright, budget projectors; 4K and laser models in the pipeline

The original Chromecast warmed the hearts of many by offering great streaming capabilities for £30. Rivals have risen to the challenge and offered their own alternatives. Can Google stay on top?

Judging by this latest version it certainly can. With a new design, shaped like a hockey puck, the 2015 version retains the original's ease of use and now has an even more responsive performance.

And it still costs £30, which in our eyes makes it worth anyone's time and money.

Focal is known for its speakers, but the company has branched out with a first pair of in-earphones.

It's a smashing start and though the £100 price may raise a few eyebrows, the Sphears justify the price with a sound that's big and conveys a convincing sense of solidity.

They're not perfect – they could do with a little more liveliness – but despite that, the Sphears are very accomplished.

Buy Ministry of Sound's Audio M speaker and you get two free tickets. That incentive, however, is not the only reason to give them a try.

It's a lively wireless speaker and one that features plenty of attack, and although details and bass are a bit lacking, what you have here is a very fun and entertaining speaker.