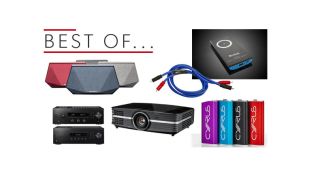 Subcribers can get their copy early - it focuses on turntables, hi-res audio and vinyl as well the latest news, opinions and reviews, with B&W's 707 S2 speaker, Roksan's Blak integrated amp and Sony's WH-1000XM2 headphones getting the review treatment.

McIntosh is jumping into the portable DAC market with the MHA50.

Featuring a 32-bit DAC that supports DSD256, DXD384 and PCM files up to 32bit/192kHz, the 3000mAh rechargeable battery has enough charge for six hours of Bluetooth playback.

Pioneer's latest stereo receivers, the SX-10AE and SX-N30AE, are built with multiroom in mind.

Multiroom options are available thanks to compatibility with FireConnect, DTS Play-Fi and Chromecast.

Dynaudio has revealed its Music range of wireless speakers, made up of the Music 1, 3, 5 and 7.

They can observe your listening habits and offer in-app tailored playlists thanks to Dynaudio's Music Now algorithm. The range can also adapt to the room environment and optimise performance based on where they sit.

If you're going to Indulgence Show this weekend, you'll be able to see the range in person.

Focal and Ubisoft team up for bank-breaking gold headphones

Alexa comes to iOS and Android via Amazon Music app

The world now has a choice of Sonos vinyl systems

Previous 4K projectors have cost the earth, but not Optoma's UHD65 - it lies lower down the price range.

While it does not have the bells and whistles of a truly high-end effort, the UHD65 puts in a cracking performance, showing a good range of colours, impressive level of detail and nice handling of movement onscreen.

We're not too fond of how dark scenes are showcased and SDR conversion to HDR is best avoided.

Nevertheless, Optoma's UHD65 deserves consideration if you're looking to move into the 4k game.

If you want a cable that does not inhibit the performance of your hi-fi components, the Clearway RCA might be the perfect fit.

Not to be confused with the Award-winning Clearway speaker cable, it's more in line with the C-Line, offering improved transparency, precision and detail over that effort.

The price may be a bugbear, but if you want cabling that aids your system in all the right ways, give this a look.

Cyrus' soundKey is a little late to the portable DAC market, but it's worth the wait.

What strikes us about the soundKey is how clean and open it can make a recording sound, revealing plenty of detail and character.

iOS owners will have to go through a convoluted way to to get it working, but otherwise the soundKey is an exceedingly talented performer for those who listen to music on the go.